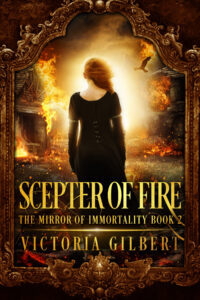 She’s the ugly duckling in a family of swans. But Varna Lund is determined to live a life that matters.

Ridiculed by the young men of her village, Varna vows she’ll become the finest healer in the land. The skills she’s learned from her ancient mentor prove vital when she encounters Erik Stahl, a young soldier who deserted the battlefield to carry an injured friend to safety. Aided by her sister Gerda, she cares for the soldiers in secret.

When betrayal catapults the four young people into life on the run, Varna encounters her former mentor—now revealed as the sorcerer, Sten Rask. Seeking an enchanted mirror that offers unlimited power, Rask appears determined to seduce Varna to his side.

To protect their country, Varna and her companions form an alliance with a former Snow Queen, a scholar, and an enchantress. But when Rask tempts her with beauty and power, Varna’s heart becomes a battlefield. Caught between loyalty to her companions and a man whose kisses ignite a fire on her lips, Varna must choose—embrace her own desires, or fight for a society that’s always spurned her.

Inspired by Hans Christian Andersen’s “The Ugly Duckling” and “The Steadfast Tin Soldier,” SCEPTER OF FIRE is set in a nineteenth-century Scandinavia where magic is as real, as dangerous, and as powerful, as war and love.