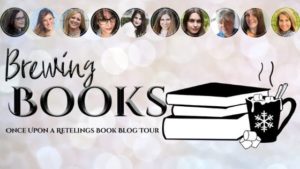 I’m excited to be a part of the Brewing Books Retellings Tour this year with nine other fabulous authors. If you’d like to participate, you can visit all ten blogs, collect the numbers, and then enter the final total on the Brewing Books Rules Post (www.bit.ly/BrewingBooksRules) for your chance to win one of our amazing Brewing Books Prize Packs!

Today I’m featuring CROWN OF ICE, the first book in my Mirror of Immortality series. It is a retelling of Hans Christian Andersen’s “Snow Queen,” from the point of view of the Snow Queen! 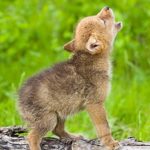 One of the fun aspects of this rather dark tale is Luki, the wolf pup the main character adopts to further her scheme for survival. However, despite her calculated decision to raise the pup, Luki ends up stealing her heart. Readers say that he steals their hearts as well!

In keeping with Andersen’s story, there’s also a talking – and flying – reindeer named Bae, a magical mirror, and a sorceress who lives in a cottage with an enchanted garden.

Here’s the cover and a blurb: 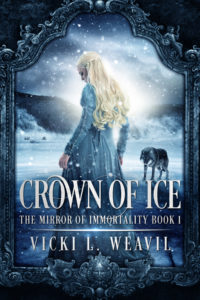 You can find out more, including buy links, here: https://victoriagilbertmysteries.com/other-books-and-poetry/crown-of-ice/

The second book in the series, SCEPTER OF FIRE, is a mash-up retelling of Andersen’s “Steadfast Tin Soldier” and “The Ugly Duckling.” Find out more about it here: https://victoriagilbertmysteries.com/wp-admin/post.php?post=971&action=edit

There will be THREE lucky winners of prize packs — GRAND, GOLD, and SILVER. All include delicious beverages and snacks along with the books!

GOLD: 3 books! OF LEGEND AND LORE (anthology); DAUGHTER OF THE FOREST by Juliet Marillier; and THE BEAR AND THE NIGHTINGALE by Katherine Arden

I will be contributing signed copies of CROWN OF ICE and SCEPTER OF FIRE, along with a mug filled with cocoa, coffee, and a cookie treat! It will allow you sit by the fire and “dream” while read the adventures of a Snow Queen, her pet wolf, and the friends she never knew she needed. 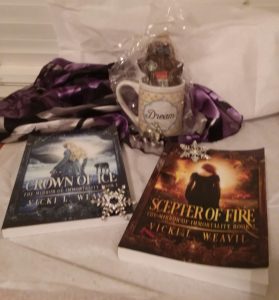 Thanks so much for joining my stop of the Brewing Books Retellings Tour. Your next stop is Heather Hayden. Go visit Heather’s blog at www.hhaydenwriter.com

My Linktree — all links are here!